Do you want to improve your email marketing campaign? If you’re not happy with the results that you’re getting, then start using A/B split testing.

With A/B split testing, you can test two different versions of the same email and determine which version receives the highest conversion rates. Compare different calls to action, headers, subject lines, and other variables. If you’re new to A/B split testing, then look over the following tips.

Decide What You Want to Test

The first step is to determine what you want to test. A/B split testing is only effective if you change one variable between your two versions of your content. So, you can only change one thing at a time until you get your results. Here are a few examples of commonly tested variables:

You’ll simply change one of these variables. Create the email that you would like to send. Then create a second copy of the email. Divide them into two separate campaigns. Make a single change to one version of your email.

Decide Who You Want to Test 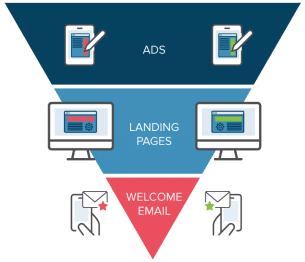 You should test as large of a sample as possible. Though, if you’re testing an extreme idea, you may want to stick to a smaller portion of your subscriber list.

Sending your emails out to a large group will provide more accurate results. But, if you’re testing an extreme idea, you don’t want to risk losing a large portion of your subscribers – in the event they don’t respond well to your idea.

After you’ve sent out your emails, you can analyze the results. Compare the results of the two emails. You’ll want to pay attention to several different metrics, including:

Examine these metrics and determine which version of your email received the best results. You can use this to test different ideas and to improve your ability to write effective emails.

The most commonly tested variables include the subject line and the call to action. But, you can test any part of your email that you’d like.

After completing your test and analyzing your results, implement the change that worked best in your next email marketing campaign. Continue using A/B split testing whenever you send out a group of emails.

You can think of A/B split testing as a teaching opportunity. You’ll learn what works best and improve your email marketing skills.

The majority of email marketing software will have built-in tools for performing A/B split testing. For those that don’t have access to A/B split testing tools, you can perform the test manually. Simply split the list that you’re testing into two groups. Send one version of the email to one group and the other version to your second group.

A/B split testing is relatively simple to implement. Get started the next time you send a group of emails out to your subscribers. Just remember – you should only test one variable at a time. Otherwise, you’ll not get accurate results.

Along with A/B split testing, there are plenty of other ways to maximize your online marketing efforts. Click here to discover an effective lead generation system and online marketing techniques with my done-for-you system.

Stillwagon, A. (Posted: November 20, 2014). Image of analyzing results: How to Analyze and Interpret Survey Results. Retrieved from http://smallbiztrends.com/2014/11/how-to-interpret-survey-results.html